The HISTORY of KC Strips

Thanks to Jim B.

In February, 1975, Victor Gugliuzza and Victor Peck, as well as three others, met and formed what was an inventive  and very unique idea for the times–to have a club of men meet without clothing so that the beauty of the nude male could be enjoyed.

We are most appreciative to the Vics for their diligence and perseverance in the establishment of the club, called Kansas City Strip (or KCS) those many years ago.  Without their earnest endeavors we would “alas” have no club today.  It must have been very difficult in the early days and we bet there was a lot of “brow beating” involved.  As recognition of their continued efforts to establish one of the two oldest clubs of this type with continuous operation in the nation, the Vics were made permanent lifetime members of  KCS in March, 2006.  A heartfelt thank you to both the Vics for their contribution which has seen hundreds of men follow in their footsteps and embody the ideals of the original club establishment.  We hope that many more men will come to know the unique beauty that is found in male naturism.

David F. shared this article found in a past issue of The Pitch. (Interview with Victor Peck) 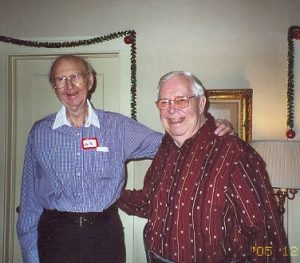